… or not to white! That's the question I'll try to answer this weekend. We have a huge sort of build in closet in our bedroom that we moved during our renovation. It was an old thing and as mentioned pretty big. It didn't take the move all that well and we had to keep it outside for a couple of months which didn't improve its condition all that much.

It is sort of white at the moment. Well perhaps more like a white with yellow highlights. The previous owners painted everything in the same cheap wall paint so the dirt of the last ten years shows easily on it. Now why did we move it at all in the first place? Because we are cheap! Or as I’d rather call it; We’re frugal. At the time it just didn’t make any sense for us to go out and buy something new. We already had it and it was huge. Sure we had to take it apart piece by piece and cut it down a bit since the room we were moving it too hadn’t as high ceilings as our previous bedroom (Oh the joys of living in a 1938 bungalow)

The reassembling was a nightmare and it turned out extremely ugly and for months we have walked around and looked at it, wondering if we should keep it or not but in the end the cheap frugal side of us won. There’s no need to throw out things that are still functional, right? And obviously it’s still functional, it’s a closet for goodness sake.

Then followed months of discussing if we should repaint it white because that seems to be norm here in Denmark. If you have painted furniture, it’s white. Period. But on all those nights where I laid in bed waiting for Flemming to finally come to bed I looked at this giant white/yellow monster in my dark bedroom and hated it. I’m a light sleeper and need a dark quiet room to get any kind of sleep and that big old white thing were ruining it for me. 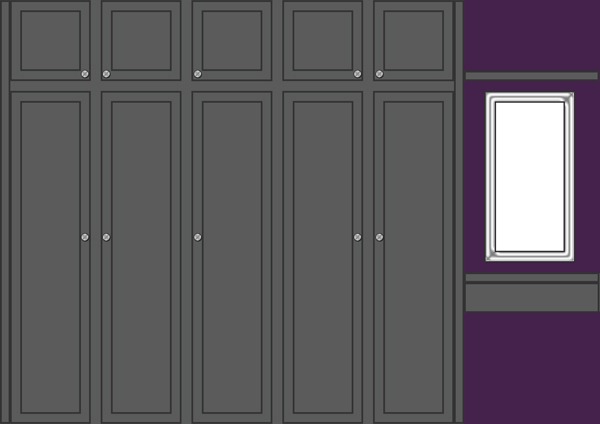 So now I’m thinking of breaking the rules (at least the Danish rules of style) and paint it grey. Did you know I love grey? I guess my blog design kind of gave me away on that one. Flemming’s concern is that it will make the room feel really dark and really small. My objection to his concern is that it is a bedroom. It’s not like we are going to throw a party there.

We spend the morning looking at color swatches and every time he found a color he liked I picked the color just a bit darker. I guess all we could agree on today was to disagree. We walked away with just enough paint to paint the bedside tables I picked up at a thrift store last year. It wasn’t quite as dark as I wanted it but at least darker then what he wanted. (That so means I won the battle of color, right?)

Don’t worry I’ll be back with an update on what we ended up with. Grey, white, a different closet or a divorce. The way I see it, these are our options at this point.