It's been a rewarding year

It is that time of the year again. Where we put on our best dresses (and bodies ;)) and go to the Scrappy Awards at DSP. I've been anxiously awaiting this event because for me it celebrates my first true anniversary as a scrapper. Sure I had done some before but it wasn't really until last year when I entered a layout just for the fun of it (although there was nothing fun about the layout) and actually won for Best Journaling.
It wasn't as much the winning part that excited me the most, as it were all the words of encouragements that followed. I had never experienced so many people actually care about what I was doing. Something I had really missed up until that point. Slowly I grew as a scrapper over the summer and much to my own surprise got a place at the world's best creative team, Digital Elite Team, after a tough competition in September. 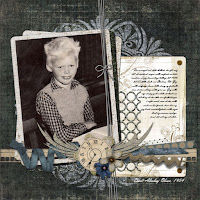 I confess to crying tears of joy the day I got my first layout inducted to the Hall of Fame. And crying tears of pain after just finishing the layout that was so difficult for me to do. And that has pretty much been the theme of my scrapping this past year. From time to time I've felt strong enough to deal with some of those hard stories I need to get down on paper for future generations to understand my family's history. Stories are supposed to be told not just the good parts but also all those filled with bittersweet memories.

In many ways this has been a year full of life altering decessions and although I'm not proud of all them and I'm certain a few people have felt let down by me, I'm sure that at some point they will feel as the right ones because I do believe that I'm slowly moving towards something that I was meant to do whatever that may be.

So here we are a year later and it is time for the Scrappies once more. This year I'm nominated in four categories and I still feel as surprised as I did last year, not really believing that someone actually like what I make. This is not saying that scrapping is my life, I'm merely saying that scrapping has become a symbol of everything else going on in my life. So this anniversary is truely a milestone and I'm thankful for all the experiences I've had and people I've met this past year and of course I can't help but to think about where I'll be in life a year from now...
Indsendt af Jeanet kl. 5:47 AM
Email ThisBlogThis!Share to TwitterShare to FacebookShare to Pinterest
Etiketter: Digital Scrapbook Place, Digital Scrapbooking, Random Ramblings